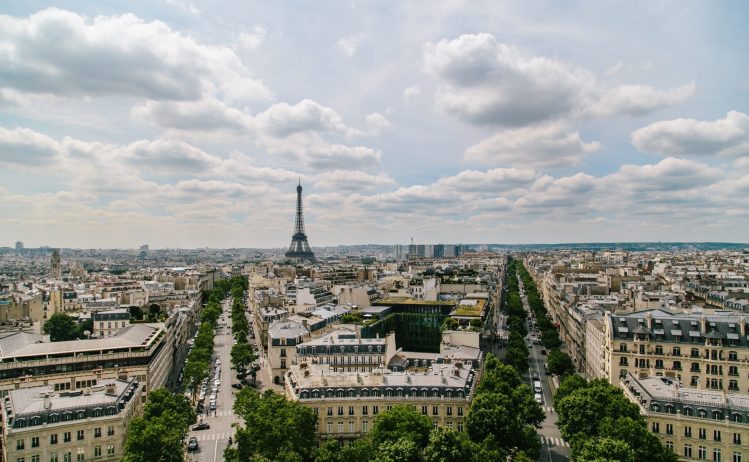 If you’ve been keeping up with my blog since my summer off, you might remember that I wrote about my time in London. And while I’m always excited to go back to London, the second leg of our trip was what we were looking forward to the most – Paris.

After one last breakfast in London, we headed to St. Pancras to catch our train to Paris. Honestly, I wish I could tell you something about the train (was it comfortable, how long did it take, etc.) but I fell asleep almost immediately after sitting down. There’s just something about any sort of long-term transportation that always makes me fall asleep. So after Lord knows how long, we ended up in a very beautiful, but very hot, Paris.

Actually, I’ll just get this out of the way now – we were in Paris for multiple days of 100º+ heat, one of which broke the all-time high heat record. So yes, it was extremely hot. No, I am not exaggerating when I say I was sweating from places I didn’t even know I could, And no, I didn’t care. Because I was in PARIS. The only place my heart and soul have felt at peace and content, not ever wanting more. (Besides maybe a fan.) Paris is my happy place, the city I always long for and dream to live in one day. But until that day, I’ll have the memories of this trip (and others!) to keep me company.

DAY 1
Once we hopped off the train and dropped our luggage off at the hotel, we grabbed a bite to eat and went straight to the Champs Élysées. We both really needed to stretch out legs after being on the train all afternoon, so we decided this was the perfect first stop.

We walked down the whole street, past all of the nice shops and cafés until we got to what has become my favorite first “go-to” stop in Paris – Ladureé. Probably cheesy and definitely touristy, we waited in line to buy some world-famous macarons before continuing on to the main destination of the evening, the Arc de Triomphe. We climbed alllllll the way to the top to get the best view of Paris (in my opinion) and enjoy it as the sun started to set.

After soaking in the view, we both started to get tired (it was 9pm at that point), so we marched back down the steps and into a nearby café for a light dinner. On our way back to our hotel we got lost on the Métro (that seemed to be a trend for us in Paris lol) but we made it back eventually, falling into bed just after midnight.

DAY 2
Before we came on our trip, we purchased Paris Passes, which we loved having and were absolute lifesavers in terms of both money and time. I could not recommend them more, as they were worth every penny and can save you so much hassle and stress when you are in Paris. With the Pass, you get Métro tickets, guaranteed entrance into hundreds of sights, attractions and museums, discounts on so many others, and more. We purchased our Paris Passes well ahead of time, but found that we had a slight problem with them. The date on the back said they were already expired! So we just found the customer service office and went to explain. Since Paris Passes are valid for a whole year from your purchase date, we knew there had been some sort of mistake. We had what was easily the quickest, friendliest and most efficient customer service experience I’d had in a long time and were back to exploring before we knew it. Luckily the customer service office was super close to our next stop – our motorcycle tour (!!!!) – so we were able to walk.

Our motorcycle tour, given by Leo of Retro Tour Paris, was hands down the most fun and exhilarating was to see Paris. We had three routes to choose from (Historic Paris, Latin Quarter or Montmartre) and we chose Montmartre since Leo said it was the best way to see the true Paris. And he was so right. We traveled over cobblestone streets, saw famous buildings and landmarks (the Amelie restaurant, Sacre Coeur, Dalida’s House, Moulin Rouge, the Wall of Love, and so much more), and even rode through the area of Montmartre that Leo’s family was from. We had such an amazing time on our 1.5-hour tour and I absolutely could not recommend it more. (Click here for more info!)

Once we said goodbye to Leo and ate some ice cream (a necessity on a day that hot) we began our walking tour of Historic Paris from Rick Steve’s guidebook to Paris. The first stop was Notre Dame, which was a sad one. I was so heartbroken this past spring when it caught fire, but it was wonderful to see that they have already made great strides in the cleanup and rebuilding efforts. From there, we went on to see Square Viviani, Shakespeare and Co. Bookstore, St. Severin, Place St. Michel, the Concierge, Place Dauphine and so much more.

To continue our day where the goal was apparently to see every bit of Paris, we spent the night taking a river cruise and just appreciating the beauty of this incredible city. We had a very late dinner as the sun was setting (10:30pm!), got lost once again on the Métro back to our hotel and finally got to sleep around 1am.

DAY 3
Up earlier than I think either of us would have liked, it was all for a good cause, because it was Versailles day. We caught the train out of Paris and used our maps as fans (gotta love Europe’s “no A/C needed” attitude, right?) until we arrived. We opted for the audio tour since we’re both huge history nerds and absolutely loved it.

After touring the chateau, we headed out to the gardens. Since there are almost 2,000 acres of gardens at Versailles and it was our second 100º day in a row, we decided to take the easy way out and hop on the tram to see as much as we could. The tram dropped us off at both the Grand Trianon and the Petit Trianon palaces, giving us plenty of time to explore both. From there, we took a quick walk over to the Queen’s Hamlet, to see where Marie Antoinette’s little village was. We made one last stop at the gift shop for some water and postcards, and we headed back into Paris.

Since we still had plenty of daylight when we got back into the city, we decided on an early dinner (8:30pm lol) before we strolled around the streets surrounding the Sorbonne. It was such a beautiful evening and despite the heat, we had the best time simply walking around and enjoying Paris.

DAY 4
The record-breaking heat day. Since we knew it was going to be the hottest day of the trip, we decided to spend the morning at the Musée D’Orsay to stay cool. Again, we opted for the audio guides, but this time it was because even though we enjoy art, we know absolutely nothing about it. After a few blissful, A/C-filled hours, we stopped for a quick lunch before heading to our next stop – the Eiffel Tower.

Though this was not my first trip to Paris (I’ve been fortunate enough to have been twice before), this was going to be my first time going up the Eiffel Tower. Line 6 on the Métro was under construction at the time, so we asked a local for directions and tried to make the best of the 2-mile walk we had to take in the 109º heat. There was lots of water, lots of sweating and probably a little bit of heat exhaustion, but eventually, we made it. We had booked our tickets well in advance to head to the Summit, but unfortunately, because of the dangerous temperatures that day, they weren’t allowing visitors to the top. We “settled” for a second-level view and it was so amazing. Once we made our trip back down to the ground, we began our trek back to Montmartre and the Sacre Coeur. Having briefly seen it during our motorcycle tour, we had both agreed that we needed to go back for a proper visit.

We stumbled our way through many, many Métro stops back to Abbesses, where we wandered over to take a better look at the hidden gem that Leo had taken us to two days before – the Wall of Love. 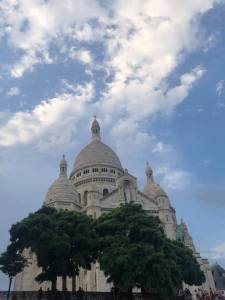 One of my now-favorite pieces of Paris, the Wall of Love features the words “I love you” in over 300 languages. After our stop there, we made our way through the charming streets of Montmartre back uphill towards the Sacre Coeur.

As beautiful as she is large, the Sacre Coeur is the Basilica of the Sacred Heart of Paris. A Catholic church, the Sacre Coeur was built from 1875 to 1914. Legend has it that when the bell finally rang out for the first time, the vibrations were so strong that they cracked the bell tower from top to bottom, leaving the crack that now runs from the base of the building to the top of the tower. It scared Parisians so much that it hasn’t been rung since. All good things must come to an end though, and so did our time in Montmartre. We enjoyed a quiet, relaxing dinner at a café as the sunset over my new favorite corner of Paris.

DAY 5
By far the most laid-back day that we had, we decided to have a little lie-in for our last true day in Paris. After a late breakfast, we were off to the Palais Royal. We walked through the gardens, grabbing an iced coffee at the cutest Café Kitsune, and just sat and enjoyed Paris. Once the iced coffees were done, we strolled over to the Jardin des Tuileries where we made multiple stops to people watch and just relax. Simply strolling along, sitting and listening to the birds chirping while a light breeze blew was such a relaxing and therapeutic experience, making me fall in love with Paris all over again.

An hour or so later, we made our way over to the Louvre to begin our guided comedy tour. As I’ve previously stated, we don’t know much about art and we love to laugh, so this was the perfect tour for us. Our tour guide Cedrik was simply amazing. He was so charismatic and knowledgeable about seemingly everything in the Louvre – which is no easy feat! We found him through Airbnb and his tour was so worth it. (Book it here, I highly recommend it!) After our awesome 2.5 hours with Cedrik, we did some cheesy souvenir shopping before actually getting an early dinner. Since it was our last evening in Paris, we reallyyyy tried to drag out our time at the café, but eventually, it was time to say goodbye to my “heart home,” Paris.

Writing all of this out actually feels longer to me than my time in Paris. Time definitely does fly when you’re having fun and I am so glad I was fortunate enough to be able to visit Paris once more. And I’m sure it won’t be my last. Tell me your favorite parts of Paris in the comments below so I can start planning my next trip!

This site uses Akismet to reduce spam. Learn how your comment data is processed.